This is probably the most famous scene from “On the Waterfront” film. It is an illustration of how directors work adapting the script.

Your screenplay can be a masterpiece. However, without excellent acting and fabulous directing, the script is just a bunch of papers. The goal of the director is to revive the given script material transforming it to the live and truthful form filled with outstanding performance of the actors. Of course, we need brilliant screenwriters. Without them we would not have the art of film and theater. But, no matter how good is the script, the screenplay is just a basis or blueprint of the film.
Building, creating or developing a character by the actor is a time-consuming process. It can take months of careful preparations in order to generate outstanding character, who truthfully lives in the given circumstances. How to create character is covered in chapter 12 “Characterization, Building a Character” of “The Art of Directing” book. Sometimes, an actor will object to certain words in the screenplay because they can be inconsistent with some facets of the character. This is an absolutely normal situation. Many directors change the script, sometimes even at the last moment in order to adapt it and make it more believable for the audience. But director should not easily be swayed by the whims of actors either.

To make a point about how the script adaptation process works, let’s explore the famous work of Marlon Brando in On the Waterfront. This example was given by great teacher Judith Weston in her books and workshops. Brando won the Oscar for his role as Terry Malloy. Marlon Brando was unhappy with the taxicab scene and convinced Elia Kazan to change it. For the famous “I coulda’ been a contender scene”, he suggested Kazan that the scene in a script looks unrealistic. According to the script Brando should act the entire scene with his character being held at gunpoint by his brother Charlie (played by Rod Steiger). Brando insisted on gently pushing away the gun, saying that Terry would never believe that his brother would pull the trigger and emphasized that he could continue his speech while fearing a gun on him. Eventually, Kazan allowed Brando to improvise and later expressed a deep respect and admiration for Brando’s understanding by saying:

“… what was extraordinary about his performance, I feel, is the contrast of the tough-guy front and the extreme delicacy and gentle cast of his behavior. What other actor, when his brother draws a pistol to force him to do something shameful, would put his hand on the gun and push it away with the gentleness of a caress? Who else could read ‘Oh, Charley!’ in a tone of reproach that is so loving and so melancholy and suggests the terrific depth of pain?…If there is a better performance by a man in the history of film in America, I don’t know what it is.”

Screenwriter of this film, Budd Schulberg, in a 1994 GQ article reveals that he did not want the script to be changed. Kazan called them together for a reading of the scene. Brando’s problem was the point at which Charlie, played by Rod Steiger, pulls out the gun. Brando said to the director: “I’ve got all that stuff where I say‘ I could be a contender’ and that my brother and Johnny sold me out, all those dreams of what I could’ve been’ how can I say all that with a gun pointing at me?” Schulberg says that Kazan responded by saying: “What if you just reach out quietly and push the barrel down a little so it’s not pointing at you?”
This example illustrates not only how directors work adapting the script in collaboration with the actors, but how to deal with the character. As it was with Marlon Brando scenario, the character been created by an actor cannot be arbitrarily manipulated by the director. You are not able to enforce the actor to do what is not suitable to his character, because it has a soul and may act as a real person.

The process of making the film, from rehearsals to the production by itself, is extremely dynamic. The desire to preserve something within the script, such as a fact that the author wanted to say, can lead to the death of the creative process to some degree. The subtext, character descriptions, spine, or objective of the characters may be well explained by the screenwriter. But do not apply it mechanically and do not follow all of them. I don’t want to say that the script is not important; the script is the base of film. Without a well done script you cannot create a good movie. But forget about any intentions of author of script. Think from scratch. Your prerogative and goal is to wake up the script. The script is the scheme, plan or blueprint of the movie. The film you are shooting is the construction of the actual building. If you see that something doesn’t work, change it even if it’s five minutes before the shooting.
The work of the director is a dynamic, creative expression of any literature pieces. There are an infinite number of options on how to create movies from the same script. Therefore, any plays or literature masterpieces can be adapted millions of times and each time it will be different, a new story with new, unique characters. 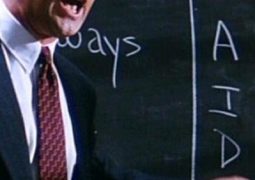 One thought on “Adaptation of a Script and Directing”