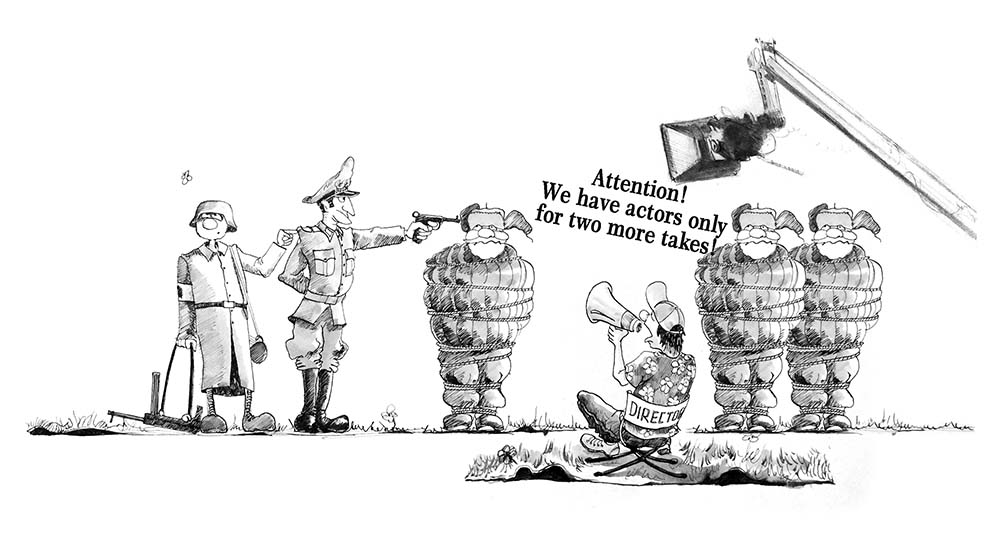 Archimedes demonstrated how to kill two birds with one stone by using an ingenious idea to relate the inside and outside of circles and spheres. An incredible Greek philosopher showed to the people of an ancient Greece how the Inside Out Principle works. The Inside Out Principle, the Golden Ratio and the Principle of Minimum Actions as well as many others are so universal, that they can be applied not only to physics and math, but also to human behavior.
According to the science of psychophysiology, there is a strong connection between a person’s physical body and his inner world. The slightest change in a person’s interior universe (thoughts, feelings, emotions) creates changes in his movements and expressions. We are a species that moves and reacts constantly. Stanislavski said that the connections between the feelings and actions of performing actors should be as united and indivisible as they are for real people.
The Inside Out principle is the idea that the inner world of the actor is the primary source for the truth in the scene. This concept is a basic assumption of the majority of acting and directing techniques.

The best way to avoid a Result-Oriented directing problem in working with actors is by applying the INSIDE OUT principle.

Let’s look at a hypothetical scene with a protagonist named Mr. Allen, comparing the language of a Result-Oriented approach with the language and tools of proper direction. There are some very important differences between these two approaches. Proper direction is challenging and takes thought and energy, whereas Result-Direction is simple, but leads to fake expressions. Assume that our character Mr. Allan is an aspiring screenwriter who lives in the beautiful city of Los Angeles.

Directing the Scene with a Result Approach

Mr. Allan SMILES when he drives down the street. He looks HAPPY when he gets good news from his agent. But when his car enters a highway with heavy traffic he becomes UNHAPPY because he realizes he is going to be late for a meeting with his boss. When a traffic accident ahead of him causes him to stop suddenly, Allan looks like he is SHOCKED. Then he becomes UPSET and ANGRY when his boss offers him a new position in a remote city. When Allan returns home, he looks CONFUSED because he is thinking about the challenges of moving to other city.
What you’ve just read is a variety of Result-Oriented directions such as SMILE, HAPPY, UNHAPPY, SHOCKED, UPSET, ANGRY, and CONFUSED. None of them is playable. Even professional actors would not understand what the director wants from these directions. For the performer, it would be very difficult to show these reactions truthfully while thinking about every emotion the director has just requested.
Again, playing a Result is the Art of Performance, an old style of acting that is no longer used. When an actor picks up the Art of Performance as his acting method, it is a formal, mechanical way of simulating emotions. It does not require living in the scene and creating a character. When the Art of Performance is mastered properly, it can be impressive and expressive in form. But there can be no spontaneity and improvisation, and it often leaves the audience indifferent and unaffected.

Mr. Allan is a screenwriter, who pursues his dream to be a working writer in Hollywood (SUPER OBJECTIVE). He just got good news from his agent (GIVEN CIRCUMSTANCES), but he is rushing because he is going to be late for a meeting with his boss (SCENE OBJECTIVE, SUBSTITUTION). It’s a beautiful day and the birds are twittering (ATMOSPHERE). Suddenly he stops short on the highway because of the traffic accident in front of him (OBSTACLE). Then his boss offers him a new position in a remote branch of the company. Allan tries to convince (ACTION VERB) his boss that he wants to remain in the town. When he gets home he imagines what his life will be like when he moves to the new branch (IMAGES). He packs boxes and does all necessary preparations for moving.
We’ve finally arrived at an example of proper direction—what every actor needs from their director: a good set of workable directions including a SUPER OBJECTIVE, a SCENE OBJECTIVE, the GIVEN CIRCUMSTANCES, a SUBSTITUTION, ATMOSPHERE, an OBSTACLE, an ACTION VERB and an IMAGE. All of them are serious tools capable of generating The Art of Living, which is key to achieving an impressive look and sound in your scene. In this scenario, even with unprepared actors you may achieve a great scene in terms of the scale and intensity of your actors’ performance. How do you use these techniques? That’s something we will clarify and illustrate in the next eighteen chapters of this book.
While working with the actors, you should always look at your script from actor’s point of view. Translate your vision into the language of acting. Notice that choosing the right direction takes more thought and energy than giving Result-Oriented directions.
Actors might disregard improper, Result-oriented directions; however such instructions can still destroy the necessary connection and relationship between an actor and a director.
What actors want more than anything from their directors is trust. To do their best when they are playing roles, actors must surrender completely to their feelings and impulses. Actors should allow themselves to be vulnerable. Therefore, they want to work with a director who understands their vulnerabilities and can create a safe and secure space for them to perform.
It’s easy to lose this connection, but by being thoughtful in her instructions, the director can maintain a safe space that will allow the actors to trust her. Working in this space, the actors can offer up exceptional performances.

There is only one way to avoid Result-Oriented Directing: by continuously practicing and using the directing tools. Good directing is elegant use of the craft terms (tools).

For more see Tools of a Director.